Status in Portugal: invasive species (listed in the annex I of Decreto-Lei n° 565/99, of 21 December)

How to recognise it

Shrub or small tree up to 8 m.

It reproduces by seed, producing many seeds that remain viable in the ground for many years. Seed production may reach 12000 seeds/m2/year, where most part accumulates underneath the tree. The seeds are dispersed by animals, mainly birds and ants, which lead to the formation of invasion foci. Germination is stimulated by fire. It presents a high growth rate.

The species also propagates vegetatively, forming shoots from the stump in some situations. However, in understory areas, under some climate conditions or seasons of the year, the species sprouts much less vigorously or may even not sprout. 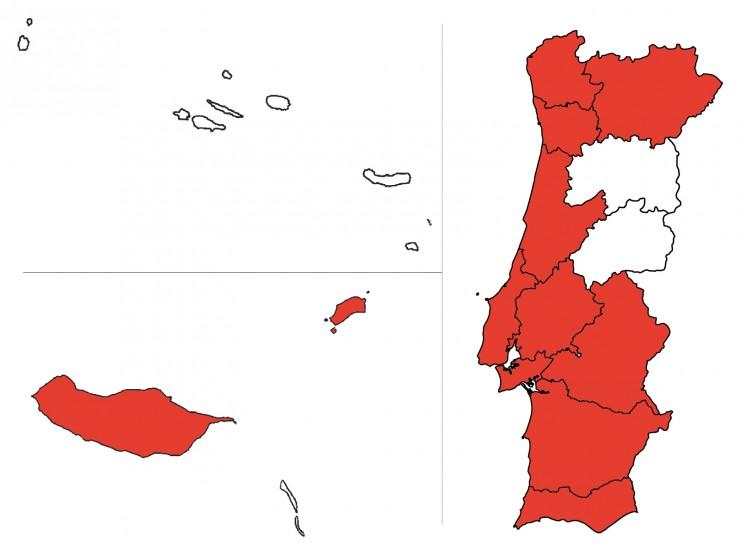 Geographic areas where there are records of Acacia longifolia

Other places where the species is invasive

For ornamental purposes and for erosion control, mainly in costal dunes.

Coastal dunes and watercourses. It also appears, although less frequently, along roadsides and over interior mountainous areas.

It is one of the invasive species that causes stronger impacts on dune ecosystems.

It forms very dense populations inhibiting the development of native vegetation, diminishing the flow of watercourses.

It produces a lot of nitrogen-rich litter, which promotes change in soil composition (carbon and nutrients, mainly nitrogen) and microbiology.

– Vegetated sea cliffs of the Atlantic and Baltic coasts (1230);

– Shifting dunes along the shoreline with Ammophila arenaria («white dunes») (2120);

– Wooded dunes of the Atlantic, Continental and Boreal region (2180);

Controlling an invasive species demands a well-planned management, which includes the determination of the invaded area, identifying the causes of invasion, assessing the impacts, defining the intervention priorities, selecting the adequate control methodologies and their application. Afterwards it is fundamental to monitor the efficiency of the methodologies and recuperation of the intervened area as to perform, whenever necessary, the follow-up control.

The control methodologies used for Acacia longifolia include:

Hand pulling: preferential methodology for seedlings and small plants. When in more compacted substrates, hand pulling must be made during the rainy season as to facilitate the removal of the root system. It should be guaranteed that no stumps and main roots are left in the ground.

Cutting: preferential methodology for adult plants. Care should be taken to cut the trunk as close to the ground as possible by using manual and/or mechanical equipment. It should be done before seed maturation. Most times, this operation is enough for the effective control of the species. However, there are situations where the sprouting occurs after cutting, making necessary the application of this methodology in posterior interventions in combination with other methodologies, namely the application of herbicide.

Cut stump method: Apply to adult plants. Cut the trunk as close to the ground as possible and immediately (in the following seconds) apply herbicide (active substance: glyphosate) to the cut stump. If shoots should latter on appear, these should be immediately eliminated when they reach 25 to 50 cm height by cutting or pulling.

The wasp Trichilogaster acaciaelongifoliae (Hymenoptera: Pteromalidae) is used with success in South Africa since 1982. This species forms galls on the floral and vegetative buds of A. longifolia inhibiting the formation of up to 90% of the seeds. Its use is combined with the weevil [Melanterius ventralis (Coleoptera: Curculionidae)] that feeds off the few remaining seeds that are formed.

OThe specificity tests, in quarantine, to evaluate the security in using T. acaciaelongifoliae in Portugal were officially authorized and concluded in 2010. Final authorization for liberation in the natural medium is being awaited.

Visit the webpage How to Control for additional and more detailed information about the correct application of these methodologies.